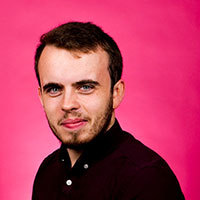 The podcast industry is full of specific terms and phrases that can be confusing for those who don’t know what they mean. Gain a better understanding of how the audio world works with this comprehensive podcast glossary.

Publish Your First Episode in Minutes

Podcast.co is the easiest way to create a podcast and share your stories. Import an existing show or create a new one. Click, drag, drop... and you’re done!

A type of audio file format that is only playable on Apple devices and software.

A bed is usually a piece of music that you run underneath someone talking as background material.

This is usually asked before you start recording, and it will determine the quality of your audio. The bit depth will often be in 16, 24 and 32, but for spoken word, 16 would be just fine.

Bit Rate is measured in Kilobits per second (or Kbps). This is letting you know how many bits of data are in a single second of audio. This only becomes relevant, however, when converting audio from WAV to MP3, as the higher the bit rate, the larger the file will be. For a normal talk show podcast with a few jingles, we recommend around 96kbps mono. If you use a lot of music, like music beds under voices and such, maybe bump it up to 128kbps.

When you’re recording audio, you’ll see a waveform on screen most of the time that shows you the volume levels of your audio. Clipping is when the audio is so loud that this waveform spikes so that it touches the edge of the recording window. This can cause nasty sounding glitches in the audio, and nobody wants those!

Creative Commons is a non-profit organisation that regulates the copyright licenses on different creative works. This includes some licenses where you can freely use the creators work as long as they are appropriately credited. For more information head to CreativeCommons.org.

A condenser microphone uses a phantom power source or battery to work, e.g. a mixer or preamplifier. Usually these microphones are more sensitive and, as a result, pick up way more of the audio in an environment.

DAW stands for Digital Audio Workstation. It sounds complicated, but it’s really not! It simply means whatever software you’re using to record and mix your podcast, so that could be Adobe Audition, Audacity, Reaper, etc.

A podcast directory displays hundreds or podcasts to potential listeners so that people can find and listen to your show. There are plenty of different directories and we’ve listed a few of the best here!

Another type of microphone, dynamic mics don’t require an additional power supply to work and are generally less sensitive than condenser mics. This can reduce the risk of peaking or clipping audio though.

Simply put, EQ stands for Equaliser or Equalisation. If you edit your audio through the EQ, it means that you can adjust certain elements of different frequencies of your audio. So a common issue that people have is a background hiss coming through after they boost the volume of certain audio. You would be able to adjust the hiss using the EQ so that it is barely noticeable, making your audio sound much clearer.

This reduces or eliminates any low frequencies from your audio. This could be things like wind noise, microphone handling or knocking things.

A short piece of audio usually used to introduce your show or to introduce different segments of your show. Most commonly a piece of music usually no longer than 20 secs.

This reduces or eliminates any high frequencies from your audio. This one isn’t used as much as the low-pass filter but it can still come in handy. One thing it’s good for is fixing distortion in caller segments if they’re calling in from Skype.

Information attached to your mp3 file, such as the podcast title, episode title, your name as the producer, cover art etc. Your DAW should give you an option to fill all this data in once you’ve finished mixing it and go to export the episode.

Your mix down is basically the audio file after you have mixed all your audio together and you’re exporting it out. The final single audio file is your mix down of your episode.

Mono audio just means that everything that’s recorded is equally balanced on one track. There are no separate Left and Right channels, all audio is equally spread across one channel that’s played on both the left and right channels.

A narrowcast is referring to content that is aimed at a specific target audience, rather than a broadcast which is aimed at a wider, mass audience.

Normalisation is an option you will find commonly in your DAW that alters the size of your waveform, meaning it will adjust the levels of the audio based on the original waveforms peaks and troughs. Essentially, it evens everything out.

Waveforms come in ‘peaks’ and ‘troughs’, with the top of the waveform being a peak, and the bottom of a waveform being a trough. Generally, you monitor these when you’re recording to make sure your levels are correct. ‘Peaking’ is when your peaks go a little too high, generally because of a louder noise, like an exciting comment or a cough.

An alphabetic list of words and brief meanings focused on the podcasting industry. A podcast glossary is a roundup of these audio technical terms.

This is referring to the general noise in the room you’re recording in. Even if you think you’re in a completely silent room, there will always be some form of tone that the mic will pick up. It’s good practice to leave 5-10 secs of room tone before you start talking on your recordings. This should help with noise reduction.

An individual link you’ll get from your media host when you sign up with them. This is where you’ll upload your podcast episodes so that you can submit your podcast to various directories easily.

A sample rate measures how many data points of a sound wave in comparison to the frame rate of the piece. As a guide, the higher the sample rate, the better your audio will sound to your listeners, however, high sample rates do mean that the file size will be larger.

Stereo audio means that the audio is split across the left and right channel. Anything on the left channel will come out of the left headphone or speaker, and anything on the right channel will come out of the right headphone or speaker. This way you can have separate sounds on the right and left, creating a vivid mental image of a scene for a listener, but it’s not always necessary. For example, you probably wouldn’t use stereo audio for a podcast that’s just you talking about a topic.

A short piece of audio, usually used as punctuation to split up certain parts of the show. For example, at the start of a news programme, you could read a headline and then have a short noise to separate it from the next one.

The act of recording and storing data to listen, watch or read later on. Podcasting is the perfect example as you’re not live like radio broadcasts; you are just recording, editing and then setting the episode to upload at a later date for your listeners.

The waveform is the display you see on your DAW of how your audio is recording.

This is the high-quality recording of your audio that sounds exactly as it was recorded. When you edit, you should always edit using WAV files, then export to the smaller MP3 file afterwards as in the conversion a little bit of the quality gets lost but this is barely noticeable.

Everything You Need to Create a Podcast

Are you looking to create a podcast of your own? In this guide, we walk...

Stand out from the crowd by creating a successful podcast. Improve your existing show or...

Getting your podcast noticed can be hard, but not when you submit your show to...